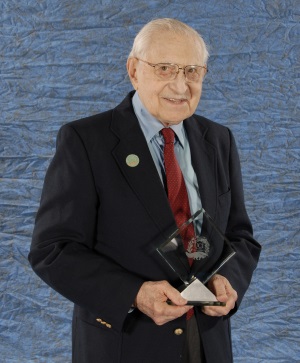 David started his career as a graduate of the City College of New York. After earning a bachelors degree in mechanical engineering, he went to work for the National Advisory Committee for Aeronautics (NACA) Langley Labs, the predecessor to the National Aeronautics and Space Administration (NASA). There he helped set up a wind tunnel for dynamic aircraft stability research. David developed a method to measure airfoil lift and pitching moments that avoided disturbance to the airflow by the wires that support the airfoil. He also worked on modifying the ailerons of a P-51 to increase its rate of roll while reducing the forces the pilot needed to apply.

David left NACA to work for the Cornell Aero Lab in Buffalo, New York. He encountered the IBM 602 and 601 multipliers that were used for internal data reduction, and became addicted to computers. Dave and two others set up the first on-line, automatic wind tunnel data reduction system (David was in charge of the analysis software). This system gave engineers test results within an hour rather than having to wait overnight. He later helped the people at Caltech to set up their system, which was almost identical t the one at Cornell. He presented his work at several institutions, including Caltech and NYU.

From Cornell, he went on to work at the Autonetics Division of North American Aviation (now Boeing), where he was in charge of software development in the Computer Design Section. In this role, Dave programmed the FADAC computer – the first digital computer for the Field Artillery.

Dave also was part of the team that worked on the first Space Shuttle. At that time, IBM had contracted with Boeing to provide the computer component for the shuttle communications and stability. IBM was unable, however, to compress the code necessary for the shuttle to remain stable while reentering the atmosphere, preventing it from tumbling down and burning upon reentry. David had developed a series of coding “tricks” for situations in which the code necessary to run certain operations might be too large for the space available. He worked with the IBM programmers to show them how to write the code in assembly language and achieve what they needed, and the rest is history.

In 1964, Dave was awarded a fellowship to pursue a Ph.D. He chose UCI because the university was using computers in education. He also helped the fledging Department of Information and Computer Science to design the computer center. Dave developed and implemented a requirement to accept passwords at individual computer terminals and send back asterisks instead of the actual characters entered.

In the 70s, David Feign was recognized by the Association of Computing Machinery (ACM) as an ACM Pioneer in the early days of computing. He is listed in three Who’s Who, including Who’s Who in the Computer Industry. He was also cited in the Computer Oral History Collection available in the Archives Center of the National Museum of American History.